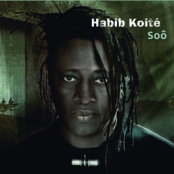 Listening Post 60. Traffic, drought and Kardashians may dent the Los Angeles brand, but the city still charmed Habib Koité, the great Malian singer-songwriter and descendant of griots. L.A. is his tribute song, favorably measuring Southern California’s sun, hills, even livestock, against what his own country offers. “Avoid comparing yourself to a race of heroes/Theirs is a special brew you should avoid drinking,” he sings, in Bambara, before switching to a chorus in English about consoling tequila (video 1). L.A. is an outlier on Koité’s exquisite eighth album, the only song set outside Mali; what links it to the other tracks is the company of musician drinking buddies he kept in California. Social glue—of friends, couples, families, communities, nations—is his thread. On Soô (Home), Koité describes tranquil and turbulent interactions, singing in four of his country’s languages, using his acute melodic sense and trademark mix of African and Western instruments—notably a guitar tuned to produce the sound of the kamale ngoni his grandfather played—and a small society of talented bandmates. Diarabi Niani (The Pain of Love) captures a romantic conundrum: “We suffer from what we love,” he observes in Maninka, “I don’t want to live without you, but routine is treacherous” (video 2). Khafole (I Told You), sung in Khassonké, is the cry of a mother whose baby dies after a circumcision: “I said he wasn’t old enough…but [they] did not listen” (video 3). Other tracks focus on patriotism, arranged marriage and the social aspects of football. LA, London, Paris, all nice places to visit, but for Koité there’s no place like home. (Contre-Jour)