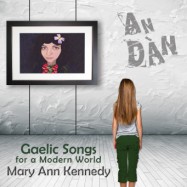 All the Right Notes for Building

Listening Post 126. Just as construction cranes on a city landscape signal renewal, so do new songs indicate the vitality of a language. Mary Ann Kennedy, an architect of the Scottish Gaelic Renaissance, builds toward the heavens not with stone and steel but with words and music. Daughter of a musical dynasty from the Isle of Skye, she grew up in a Gaelic-speaking home in Glasgow (“an urban gael,” she calls herself), where only determination keeps minority languages from melting away. After classical training (piano, harp), she became head of BBC Radio’s Gaelic news service, hosted programs on Scottish and world music and was a member of the award-winning Gaelic band Cliar—all preludes to her exquisite debut solo album, An Dàn, a collection of new songs in the service of tradition. The 11 tracks feature her elegant melodies, her pure, captivating voice and the intimacy of her stories—inspired, like many a good novel, by characters (soldier, singer, sculptor, poet) to whom she is related, knew personally or, at most, from whom she is one degree removed. In Seinn, Horo, Seinn (Sing!) Kennedy’s lyrics—“Voices as one will guard the treasure”—echo her vision of music sustaining language (video 1). Mise Fhuair (I Have Won the Apple), with lyrics by Aonghas MacNeacail, compares ripening fruit to maturing adults, and is at least partly based on Kennedy’s marriage (video 2). The mystique of Iona, once a spiritual and educational center, “a shadow of a place, a suggestion of island, dissolving in the dipping sun,” is the focus of Eadir-Thir (Between-Land, video 3). Dàn means both “song” and “fate,” the wordplay reflecting the artist’s role as a lyrical link. Gaelic has a proud past; Kennedy’s album is a beautiful part of its present and a building block of its future. (ARC Music/Watercolour Music)

Seinn, Horo, Seinn/Sing!: “Who will light me a beacon/The spark that will keep songs alive?/One voice will sing the song/But voices united will guard the treasure/We will sing the old songs/Of poetic heroes, love and glory/But there will also be new songs/Our own hearts’ music, as it should be”

Mise Fhuair/I Have Won the Apple: “When I was young and foolish/I thought the world was with me/There was no fruit on bush or tree/That I didn’t think was free to pick…/And the buds filled on my tree/With joy and the greenness of love/You grew into a round apple to my eye/That brought me sweetness beyond my hopes”