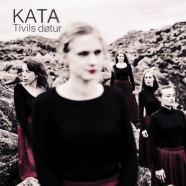 Listening Post 136. The voices of the women’s quintet are celestial and the album was recorded in a church dating from 1250, but the words embedded in Kata’s enchanting harmonies tell mostly cautionary tales. Tívils døtur (Tivil’s Daughters) features mythical heroes and folk figures, trolls, witches, giants, slayers and, always in the middle, vulnerable women—all figures in traditional songs from the Faroe Islands. Kata performs a cappella save for light drum and electronic touches and sustains an artful tension between tone and text while bridging the chasm between archaic/magical sagas and the modern/rational world. In Risin og moyggin (The Giant and the Maiden), a bumbling behemoth tries to seduce a young woman and ends up scolded by his own mother for insufficient force (video 1). Silvurlín presents a mother who rises from the grave and visits the stepmother of her children to deliver some constructive criticism on parenting (video 2). The title track finds Tívil and his wife trying to count their 141 daughters, spread out from home to the local mill to hell (video 3); while the lullaby Rura rura barnið (Cradle the Child) assures a baby that the devil is in chains and can’t catch him (video 4). Among the more graphic stories is Faðir og dóttir (Father and Daughter), in which father chops up his daughter’s lover and she gets revenge by burning the house down with daddy inside; and Torkils døtur (Torkil’s Daughters), about a sexual predator who resorts to murder. Are the women of Kata protective angels warning of dark forces? Sirens lulling us into a trance? Spinners of adult nursery rhymes about bogeymen who, when the lights go on, turn into empty shadows and winking narrators? All of the above? One thing is certain: Tívils døtur ends much too soon. (Nordic Notes/Tutl Records)

Risin og moyggin (The Giant and the Maiden) is a comical ballad about a giant who tries, without success, to win the heart of a damsel. He pretends to be a gallant knight, but he fails at playing the harp and tries to convince the young lady that it’s because of the cold. Dejected, he returns to his mother, who berates him for being too soft—unlike his father, who took his wife with power and authority. Does the story encourage men to be more assertive with women, or does it argue that one who takes a woman by force is nothing but a troll?

Silvurlín has died and from her grave she hears her young children crying. The Virgin Mary grants her request to visit them, on condition that she return to the heavens before the rooster crows. At her old house, Silvurlín reproaches the new stepmother for not taking good care of the children, offering examples of her maternal errors. Horror-stricken by the visit, the stepmother promises to become a caring mother from that moment on.

In Tívils døtur, Tívil and his wife are trying to count their daughters, which is no simple matter. Two are in hell, two have been crushed, two lay burnt in embers, two are helping their grandmother, two are grinding at the mill, two collecting water, nine are at Nívilsnesi and ten at Tívilsnesi. The other 110 are at home.

Rura rura barnið (Cradle the Child) is the best known lullaby of the Faroe Islands, intended to help a baby fall asleep. The line Krítin stendur í jarni is meant to soothe the little one, because it tells the child that the devil is chained up and nothing bad can happen. With mother, father and sister close by, the baby can safely close his eyes.