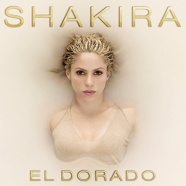 A Star Is Reborn

Listening Post 155. Shakira’s eleventh studio album, launched in 2017, showed her in peak form—bearing in mind that with Grammys galore, career record sales over 60 million and YouTube views topping 12 billion, her “peak” has an altitude mere superstars can’t reach. But the El Dorado World Tour scheduled to begin last November was delayed seven months by a vocal cord hemorrhage, and as the Colombian singer-songwriter wondered if she would ever perform again, fans worldwide held their collective breath. Happily, the tour finally opened this month in Hamburg and will close in Bogotá in November. Shakira also had doubts two years ago, not over vocal issues but from writer’s block and the career-motherhood dilemma. Inspiration returned, she said, after a project with Carols Vives made her realize she could avoid album overload by working one song at a time. The collection that ultimately came together (nine tracks in Spanish, three in English, one French-English mix) is an exhilarating blend of styles—vallenato, reggaeton, bachata, Latin pop—and features collaborations with five male artists. La Bicicleta, the duet with Vives that jumpstarted El Dorado, is also a homecoming team-up in which the two banter while cycling across their native turf on Colombia’s Caribbean coast (video 1). Sexual tension abounds in Perro Fiel (Faithful Dog), co-written and performed with Nicky Jam, an American artist now living in Colombia (video 2). Things come to a boil in Déjà Vu, an explosive brew of suspicion and seduction sung with the Dominican-American artist Prince Royce (video 3). Me Enamoré (I Fell in Love) is Shakira’s personal story of falling for her partner, footballer Gerard Piqué, who appears near the video’s end (video 4). Unlike the mythical city of gold that inspired it, Shakira’s El Dorado is real. And while its creator was uncharacteristically quiet, she spun her gold into platinum. (Sony Music US Latin)

La Bicicleta/The Bicycle
Nothing will come of/Rummaging through old wounds
Nothing to lose/I don’t want to be the guy from the wrong side of town
A desperate vallenato
My way, with my messy hair/On a bike that takes me everywhere

A little letter I keep, in which I wrote/That I dream of you and that I love you so much
For so long my heart is/Beating for you, beating for you

Hear me Carlos, take me on your bicycle
I want us to travel together, all the way/From Santa Marta to Baranquilla

Perro Fiel/Faithful Dog
You’re here/Can’t hold back anymore
How was I supposed to know/That I’d see you again?

If that happens, I’ll follow you/Like a faithful dog

When you move like that/I swear, I’m going to melt

You know I’m good
And the more I avoid you, the more you want me

Déjà Vu
You tore open the wounds that I thought were already healed/With lemon, tequila and salt

A recurring story/Just a déjà vu that never ends

I’d rather stay alone/And forget about you, forget your eyes
I’d rather dodge the dust/I don’t want to fall again, into that picture
Of madness, of total hypocrisy

If anyone is going to talk about love/I can assure you, that person won’t be me
No, it’s not going to be me

I was in with my striped bra/And my hair half done
I thought: He’s still a boy/But what am I going to do?

It’s what I was looking for/What the doctor ordered
I thought I was dreaming, oh oh, oh oh/What was I complaining about?
Don’t know what I was thinking/I’m exploding with happiness, oh oh, oh oh

One mojito, two mojitos/Look at those beautiful eyes
I’ll stay another minute