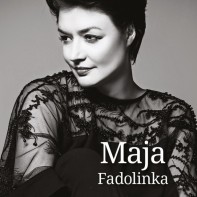 Listening Post 239. Like many artists, Maja Milinković takes advantage of unexpected opportunity and inspiration. She learned guitar in an underground shelter during the Siege of Sarajevo; it helped her stay calm and prepared her for a music career. By age 15 she was playing in a rock band and by 30, with two solo pop-rock albums behind her, she was widely known in Bosnia and Herzegovina and the Balkans. But along the way a friend showed her a video of Amália Rodrigues, the Queen of Fado, and to say Milinković was transfixed would be an understatement. She ultimately learned Portuguese, moved to Lisbon and began writing her own fado songs. Fadolinka, her sixth album, represents the closing of a circle: Once settled in Portugal, Milinković felt a new saudade—for sevdalinka, the ornate traditional music of Bosnia that matches fado in melancholy—and forged the two sides of her musical personality into a bilingual union of classics from each genre and her own compositions. What makes the album seamless is the use of fado instrumentation (Portuguese and acoustic guitars) throughout and Milinković’s captivating mezzo soprano. In Não Há Fado Sem Saudade (There’s No Fado Without Longing, video 1) she captures the defining passion of her adoptive music, and in Romansa (Romance, video 2) she renders one of Amália’s iconic songs into Bosnian. Fado das Horas (Fado of the Passing Hours, video 3) is a ballad of layered anxiety, while Tamburalo momče u tamburu (Boy With Tamburica, video 4) is an ardent sevdalinka portrait. Other highlights include the Bosnian classic Emina, about a shy man watching a beautiful woman in a garden, and the autobiographical Sinal (Sign), about a young girl who lived through a war and one day heard a voice calling her to a new land and language—and soon learned that fado means “fate.” (Seven Muses)

(from the Portuguese lyrics)
Longing, longing for you when you delay
At dawn and in those cold hours/It kindles my passion, tears at my heart
It won’t leave me/From my voice it wrests fado

Longing, longing for you on moonless nights
Searching for my soul in the dark night/To find it, I sing
It won’t leave my side/Fado takes me to the streets

In the dark of night, a knock- knock, knocking at my door:
— Where are you coming from, oh my soul?
— I come dead, almost dead.

I sent her to make a banquet of the best delicacies
— Where are you coming from, oh my beloved
That I barely recognize you?

But my soul, silent/Looked and didn’t answer
And in her beautiful eyes/how many sorrows swam!

I sent her to make the bed/with the best linen she had
Above, purple damask/underneath fine cambric

— Sleep, sleep, oh my soul/rock youself to sleep
— My voice is singing/wishing to cry…

Ajka noticed him from the porch/“Look at that handsome boy, mother!
If only I could see him down in the courtyard/And sit by his warm chest”

I would run a carnation across it/And under his head always put a red rose
That the might fragrance wake him often/And as many times awaken his love and make him kiss me!”