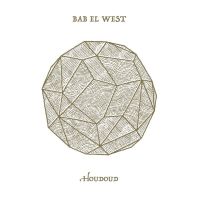 Listening Post 259. Pandemic isolation can evoke images of The Little Prince, alone on his asteroid, testing the limits of confinement as he imagines transcending space. Similar fabulous journeys are at the heart of Bab El West’s second album, inspired not by Saint-Exupéry but by surrealist poet Paul Éluard’s observation: “’Frontier’ is a one-eyed word but humankind sees the universe with two eyes.” Houdoud (Border) is a natural concept for the Paris-based band whose name means “Western Gate” and whose members—singer-songwriter Habib Farroukh, bassist Clément Vallin, drummer Marc Dupont, guitarist Hamza Bencherif and qanun virtuoso Nidhal Jaoua—have origins in North Africa and Brittany. While their music is decidedly sans frontières, a blues-rock cloth interlaced with Gnawa, chaâbi, Celtic, Afrobeat, soul and Latin strands, they well know that borders inhibit as well as invite crossing. The fables and frontiers in the album’s nine songs, sung in Arabic and Berber, embrace encounters, quests and obstacles in the natural and behavioral realms—like the tale of a woman who loved a falcon or the conversation between a deaf man and a snail. The emphasis is on organic bonds in Al Khil (The Horse), a prayer bearing the aphorism, “The outside of the horse heals the inside of the man” (video 1). The symbolism turns botanic in Nouara (Flower, video 2), a meditation on nurturing life; and solar in the joyous Adrar (Mountain, video 3). Though sonically rousing, Kelma (Speech) explores the limits of communication (video 4). Released just weeks before the expression “going viral” reclaimed its original meaning, Houdoud is a timely, lyrical reminder that as nations close borders humanity’s goal must be to rediscover the world where crossing lines poses less threat and more promise, where distinct cultures can find common space, where meeting a prince, friend or idea on the other side—or finding one within—is again possible. (Big Banana Music)

(from the Arabic lyrics)
Come with incense, sing your praises
Saint Mimoun is waiting for us
Don’t judge without having seen
Saint Mimoun holds the key to our Salvation

(from the Arabic lyrics)
Even if they say that watering sand is exhausting
The water must reach the root
For the head to work right, the body must irrigate it

(from the Arabic lyrics)
Is it my fault I’m so naive?
All these disappointments weigh heavily on the note
Is it my fault our paths have crossed?
Everyone feeds on their own roots