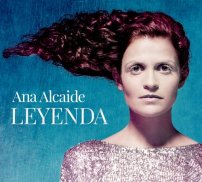 Listening Post 75. Ana Alcaide has forged a musical Silk Route to distant lands and past epochs. Blending imported elements into her work, she has made the Swedish nyckelharpa part of her medieval Spanish repertoire; released two albums exploring the Sephardic experience; and fused sounds with Indonesian musicians. On Leyenda (Legend), her fifth album, Alcaide offers fables of women who devote earthly and magical powers to good and wise, sinister and sometimes tragic ends. Her silky, seductive voice and compositions adorn vivid scenes, bringing myth to modern sensibility and evoking beings with fantastical names—lamiak, selkies, sorguiñas, undines—from Iberia as well as from China, Mexico and Scotland. Akelarre (“Witches’ Gathering” in Basque) recalls pagan feast/ceremonies of healers—experts in birthing and folk medicine—where revelers “Call to the bonfire, rites of Leviathan/Vile joy of shadows that will rise there” (video 1). In La Esposa Selkie (The Selkie Bride), based on a myth about seals that shed their skin and become human on land, a fisherman steals the skin of a beautiful selkie and promises to return it after seven years of marriage; she agrees, but the fisherman ultimately reneges and she returns to the sea, leaving behind her son, “my mortal treasure,” so she can “swim to the crystalline abyss of my freedom” (video 2). In La Mujer Muerta (Dead Woman), when two brothers who love the same woman draw swords over her, she intervenes and is killed—after which her body grows and becomes the mountain range that takes her name; the real “Mujer Muerta” is near Segovia: “South of the sunset/Draw your woman’s body/Mountain of sand and salt/Lying in solitude” (video 3). There’s much more to Leyenda—not to mention the next stop on Alcaide’s enchanting path. (ARC Music)